If you have been following my blog, you might know that one of my weird hobbies is to determine the location of where pictures were taken. My previous post on Geolocating Maks Czuperski caught quite a lot of buzz, so I thought I would write up how I solved another recent geolocation challenge, as it seems like you don’t necessarily need to catch the Russian Ministry of Defense lying about passenger planes being shot out of the sky for people to be interested in this sort of stuff.

It all started when I saw a Retweet from Christiaan Triebert on my Twitter feed:

The tweet from Miriam Steimer seemed to challenge Christiaan Triebert to find out where they were to come join them for lunch. It didn’t exactly look like a challenge meant for everyone but I couldn’t ignore it, and so I decided to give it a go…

Right-clicking on the image and Copy Image Address gave me a pretty high resolution version of the image where I could pick out details easier. 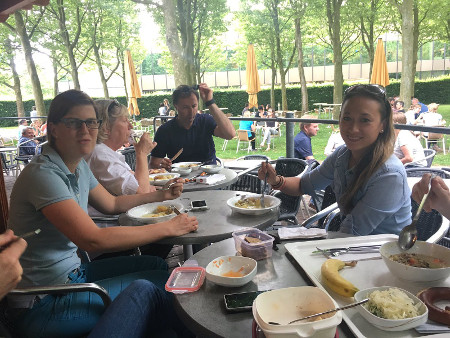 My first idea was to comb the picture for any easy-wins such as the name of the place on the yellow parasols in the background, the napkins on the table or perhaps on the cutlery or plates, but no luck there. It did make me a bit hungry though…

One detail that I noticed was something that looked like a typical employee badge hidden under the phone on the middle table: 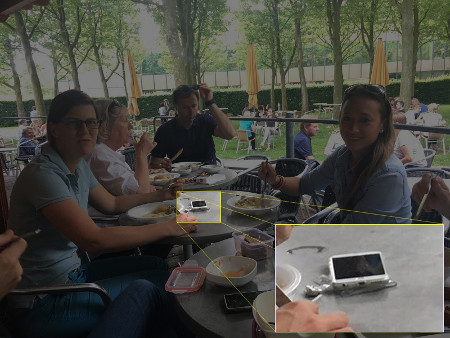 A possible employee badge under the phone.

The badge made me think that maybe they were having lunch at a work cafeteria or similar, so time to figure out where Miriam works…

Figuring out where she works was pretty straight-forward as her Twitter profile bio says she is a journalist working for ZDF and that she is located in Mainz, Germany. 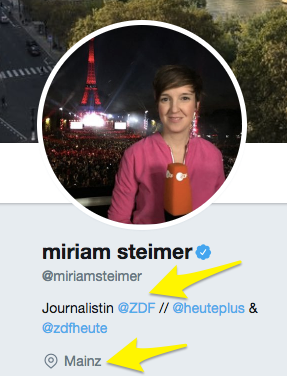 With a bit of Googling, I learned that ZDF has a big broadcasting center in Mainz with pretty interesting architecture: 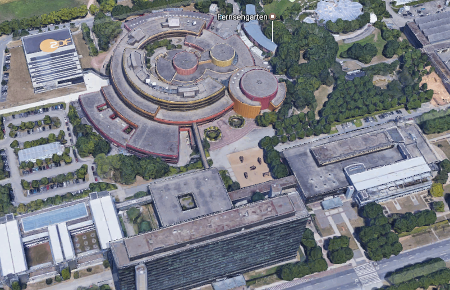 Google Maps view of the ZDF Sendezentrum in Mainz.

I went back to the picture from Miriam’s tweet to see if I could find anything that I could use to confirm that the picture was taken somewhere at the ZDF broadcasting center. After a bit of staring, I noticed that a building facade with something that looks like shiny metallic plates is visible in the background. This could be useful for determining the location more precisely. 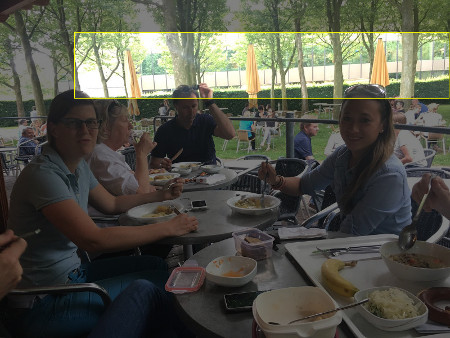 A building facade in the background.

Scrolling through the Google Image search results for ZDF sendezentrum made me come across a picture of something that looked very much like a cafeteria: 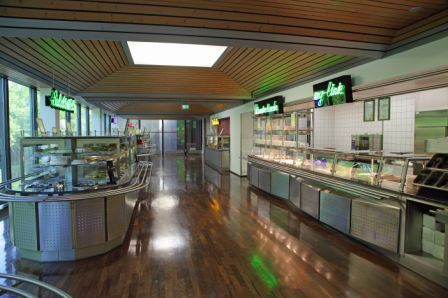 The picture was found on a web page about ZDF-Casino GmbH catering company getting the JOB & Fit certification. Doing another Google Image search for ZDF sendezentrum casino I came across another valuable image: 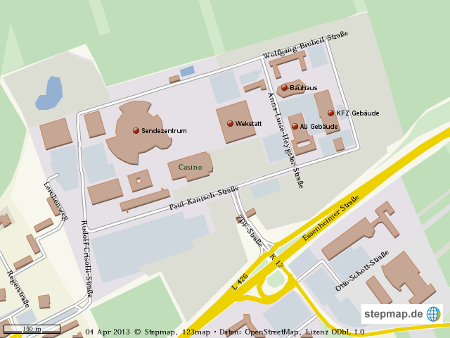 A map of the ZDF Sendezentrum with the Casino building.

Knowing that the name of the ZDF cafeteria is called Casino and having a map of the area was good and all, but I still needed to find a building with the facade that is visible in the picture. I scrolled through some more Google Image search results and came across another picture that caught my attention:

Entrance to the ZDF Sendezentrum with directions and an interesting building in the background.

I wrote a quick tweet to Miriam and Christiaan to figure out if I was going in the right direction:

Hey, random twitterer here, looks like it could be somewhere near the "Kasinogebäude"?

After a while, Christiaan replied:

Correct! Should not be hard to find the exact location now — good luck ;-)

Perfect! I used the map picture I found earlier to align my Google Maps view and tweeted my guess:

My guess was a bit off as Christiaan’s very nice breakdown shows, but I think I was close enough to call it a win. The lesson learned was to remember to always look at a place from all angles in Google Maps. Had I done that, I would have seen the yellow parasols hiding among the trees in the green area.

Christiaan later challenged me with another picture which I also solved, but I won’t go over how I did it, I will leave it as a challenge for you to find out. Maybe you can figure out how I did it. Let me know how you solved it. :)

If you feel like it, try this one. It is near (1-50km radius) of the other photo, to give a hint. pic.twitter.com/Kutw2sK6wP

If you enjoyed this post, maybe you are also interested in reading my previous post about how I Geolocated Maks Czuperski. If you would like to try out geolocation yourself, I would recommend keeping an eye on the #DigitalSherlocks hashtag on Twitter as people often tweet these sorts of challenges using that hashtag.