I recently purchased a license for Hunchly, an awesome tool for performing online investigations and general research on the web. The tool seems to be very popular among criminal investigators, journalists and OSINT geeks like me.

For those who don’t know, Hunchly is a tool that integrates directly into your browser through an extension to record and store local copies of every website you visit during an investigation. This is very convenient when doing OSINT investigations as you never loose anything, even if it gets deleted at a later time, and it makes it easy to trace your steps to how you found a particular piece of information.

Another great feature of Hunchly is the ability to associate so-called selectors to cases. Selectors are basically specific strings of interest that Hunchly will then keep track of, and notify you whenever these selectors are found on websites you visit. Selectors would normally be things like names, email addresses, phone numbers, domains and anything else that is relevant to the person or subject you are investigating.

Hunchly can be configured to automatically highlight these selectors on websites when they are encountered. It is not enabled by default, but I’m sure it’s a very common setting to enable as it makes it very easy to spot the relevant parts when browsing: 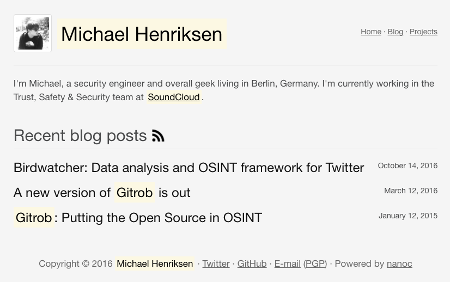 Highlighted selectors on the michenriksen.com frontpage.

The above screenshot shows how my website’s frontpage looks like when Hunchly is configured with the selectors: Michael Henriksen, SoundCloud and Gitrob. All occurrences of these strings are highlighted with a yellow background.

Since Hunchly is highlighting the selectors by modifying the HTML before it’s displayed in the browser, I started thinking about how a tech-savvy criminal, or anyone doing activities that would cause people to investigate them, such as an activist, could exploit this feature to detect the fact that someone is actively investigating them, and even get a sense of what the investigator knows and what they are interested in.

This is how Hunchly highlights selector strings:

Hunchly wraps the selectors in <mark> tags with a unique class of hunchly which can be used to very accurately determine that Hunchly is being used on a website.

Using a bit of Javascript, it is fairly easy for anyone worried about being investigated to detect it. Here is a small Proof Of Concept:

On line 14 the Javascript is looking for any <mark> tags with a hunchly class within the #canary div element. If no elements are found, it simply logs No Hunchly selectors found in canary to the console.

Line 18 - 22 is what is being executed if a Hunchly selector highlight is found within the #canary element. It logs the total amount of selectors detected and then loops over each selector to log the text that was highlighted. It finishes off with popping up an alert box with Hi there, investigator! as the message.

Instead of simply logging the information to the console, the script could easily be modified to call out to a backend script with Ajax or do something more aggressive like triggering a browser exploit, loading a BeEF hook, redirecting them to Goatse or anything else to mess with the investigator. I’m sure you can come up with other fun things to do…

Before I finish this post, I want emphasize that this is not meant as a diss to Hunchly, I think it’s an excellent tool and would recommend it to anyone doing OSINT stuff. I simply felt like pointing out a potential problem with Hunchly’s selector highlight feature, so if you are looking into someone who might be crazy enough to do stuff like this, you might want to turn that feature off. I don’t know if this is the reason it is disabled as default, or if there is another reason. Anyways, check out Hunchly website or watch this excellent video tutorial if you want to know more about the tool.