Yes, here again with another tool release. This time it’s an OSINT framework for a different social network — Twitter.com.

Birdwatcher started out as a collection of small scripts to generate a classic weighted word cloud of Tweets from a group of users. As I thought about what else I could do with data from Twitter I decided to rewrite the scripts into a full-fledged, module based, console framework with a ton more functionality.

If you have any experience working with other frameworks such as Metasploit or Recon-ng, you will feel right at home with Birdwatcher as it’s heavily inspired by these frameworks and has many of the same concepts and commands.

This blog post won’t go over how to set up Birdwatcher, but you can have a look at the README to find out how to install and configure the framework.

Just like Metasploit and Recon-ng, Birdwatcher supports the concept of Workspaces. Workspaces enable you to segment and manage users and data stored in the underlying database. You can use workspaces to create logical separation between different users. For example, you may want to create a workspace for a company, a department or for a specific topic.

The command prompt will always show the currently active workspace inside the square brackets. Birdwatcher will always have a default workspace which might be all you need if you intend to use Birdwatcher on a single group of users. If you plan to use it on several different groups, it is recommended to create a workspace for each of them, to prevent cross contamination.

The core of the Birdwatcher framework is its commands and one of the most important ones is the help command: 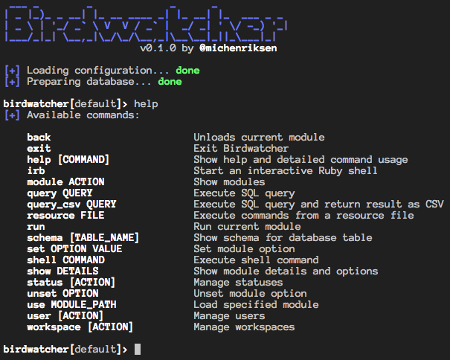 The help command simply lists all available commands with short descriptions of what they do.

Again, just like Metasploit and Recon-ng, Birdwatcher ships with a bunch of modules that either enrich the raw Twitter data harvested by the commands or somehow present the data in interesting and useful ways. Here are some of the things the modules can currently do:

Birdwatcher’s code is designed to make it pretty simple for anyone with a bit of Ruby knowledge to extend Birdwatcher with new modules. How to create one is out of scope for this blog post, but have a look at this Wiki article if you are interested in finding out more.

If you have been following the news around the Snowden documents, you might have heard of a program by the UK intelligence agency GCHQ called LOVELY HORSE. The program was made to simply monitor a smaller group of security related Twitter accounts to keep taps on what was being said and possibly more.

To demonstrate the capabilities and usage of Birdwatcher, I thought it would be fun to go through how we can create our own LOVELY HORSE program…

Instead of using the default workspace, let’s create a dedicated one for our lovely horses to keep things neat and tidy:

The workspace add command created our new workspace and automatically made it the currently active one, as can be seen in the square brackets of the command prompt.

Adding users to the workspace

Now that we have our workspace we need to add some users to it so we have something to work with. The leaked PDF contains a list of 37 Twitter accounts that we will use for this example:

One way to add the users would be to execute user add 0xcharlie alexsotirov ... WTFuzz but that would be a lot of typing and I don’t really like that. Instead we can make use of our first module to easily import them into the workspace. We copy the usernames and save them to a file and load the User Importer module:

The use command loads a module by its path. The path is determined simply by how the module files are placed in the directory stucture. Modules live inside at least one directory which can be seen as a namespace of the type of object they are working on. In this case the User Importer lives in the users/ namespace which makes pretty good sense. When a module is loaded it is also indicated in the command prompt with another set of square brackets with the module’s path in red text.

The show command can also display any options a module might have:

Options for the User Importer module.

The module is very basic and only has one option called FILE which tells the module which file to read usernames from. The table tells us that the option is required to set and that the current value is empty. Let’s configure the module and run it: 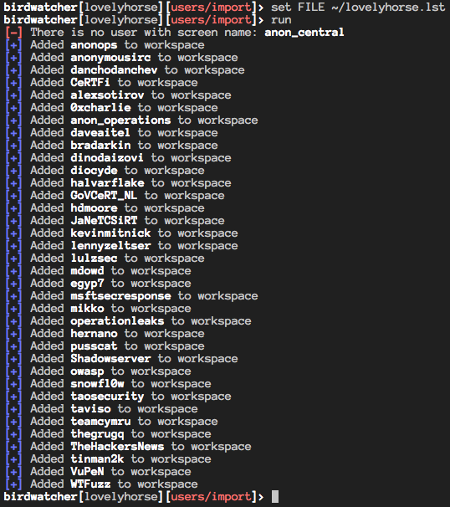 The module fetched basic user information from the Twitter API and saved them to the underlying database. We can see the users in the current workspace at any time with the user list command: 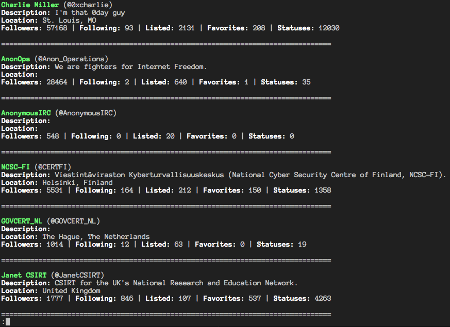 Paging through users in the workspace.

Now that we have imported our lovely horses we can fetch their Tweets from the Twitter API and have them saved to the database for analysis: 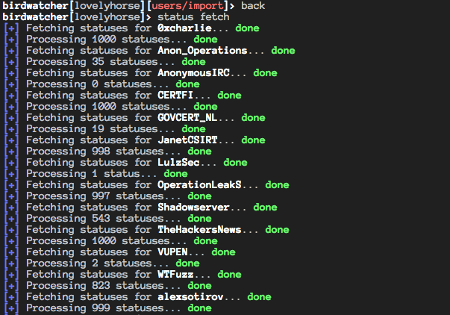 The status fetch command will fetch up to 1.000 Tweets from each user and save them to the database. The command also extracts entities such as URLs, Mentions and Hashtags to save them to separate database tables. The command might take a bit of time to finish the first time because of all the Tweets it needs to fetch and process, however on any subsequent runs, it only fetches and processes any Tweets the users might have posted since the last run.

Now that we have fetched the Tweets we can page through them with the status list command: 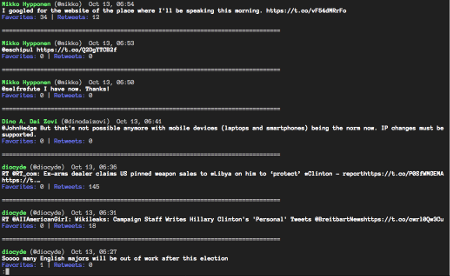 Using the status search command we can find Tweets containing a specific word or phrase, for example lovelyhorse:

After the Tweets have been fetched and processed we also have a pretty large collection of URLs that might point to interesting or valuable information. Right now we only know the URLs that were shared which can pretty hard to process. To get a better idea of which links might be interesting we can use the URL Crawler module: 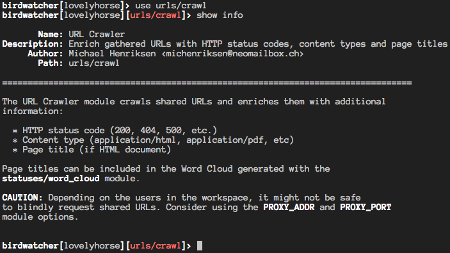 As the module information says, it enriches the collected URLs with their HTTP status codes, content types and potentially page titles if the URL points to a HTML page with a title. The module also follows redirects so in case the URL is somehow obfuscated or shortened we can know the actual destination too.

The module also warns us that it might not be safe to blindly visit all the shared URLs as it could be pointing at places you don’t want to request with your own IP. Let’s check the module’s options to see what we can do:

This module has a bit more options than the users/import module. None of them are required but the PROXY_ADDR and PROXY_PORT are definitely a good idea to configure. The options will instruct the module to request all URLs through a HTTP proxy to hide the origin of the request for your own safety and OPSEC. I personally have Tor installed and its SOCKS proxy exposed as an HTTP proxy with Polipo. Check out this blog post if you want to know how it’s done.

We configure the module to use a proxy and run it. It will steadily crunch through the URLs but it might take a while to finish, depending on your connection speed, proxy, THREADS setting and the amount of URLs to crawl. The first time you run this module it can take quite a long time as it needs to process a lot of URLs.

The Klout API can give us a lot of valuable information on users such as their ]Klout score which can be used to find users with the most reach and influence, the general topics they are Tweeting about, and an influence graph which can tell us who each user is influencing and who they are being influenced by.

The first module we need to run is the users/klout_id module. This module simply retrieves each user’s Klout ID which is needed for all the other Klout related modules: 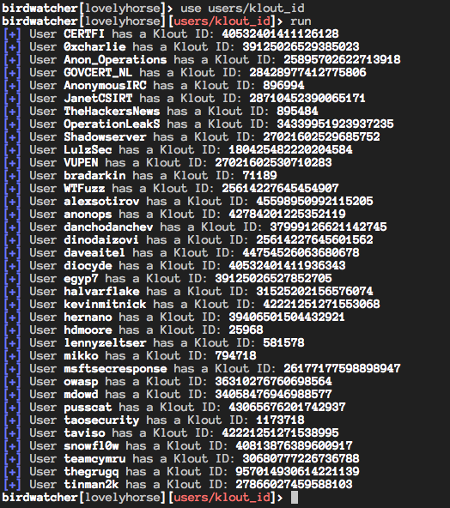 Next we run the users/klout_topics module which retrieves the general topics that each user is Tweeting about such as Technology, Hacking, Marketing, Information Security, etc. Each topic will be saved in a table and referenced through a join table to users, to make it easy to retrieve users who Tweet, or don’t Tweet, about a specific topic: 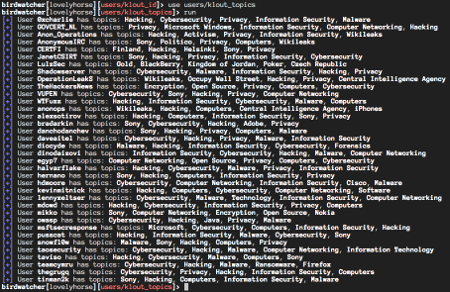 If we want to know about how influential each user is, we can use the users/klout_score module to retrieve their Klout score. The score is calculated by Klout and is explained here, but the higher the score the more influential the user is: 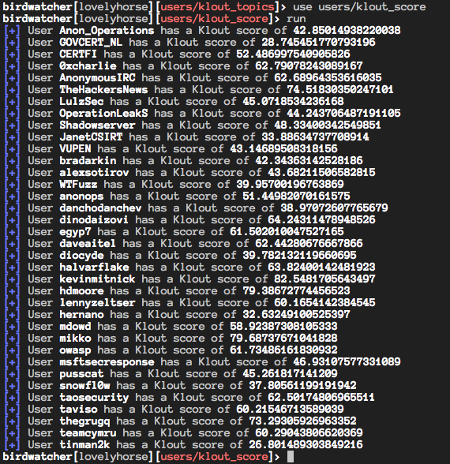 From the output we can see that mikko is the most influential followed by hdmoore and thegrugq. The klout score will of course also be saved to the database to make querying based on Klout scores possible.

Lastly we will run the users/klout_influence module to retrieve information about who our users are being influenced by and who they are influencing: 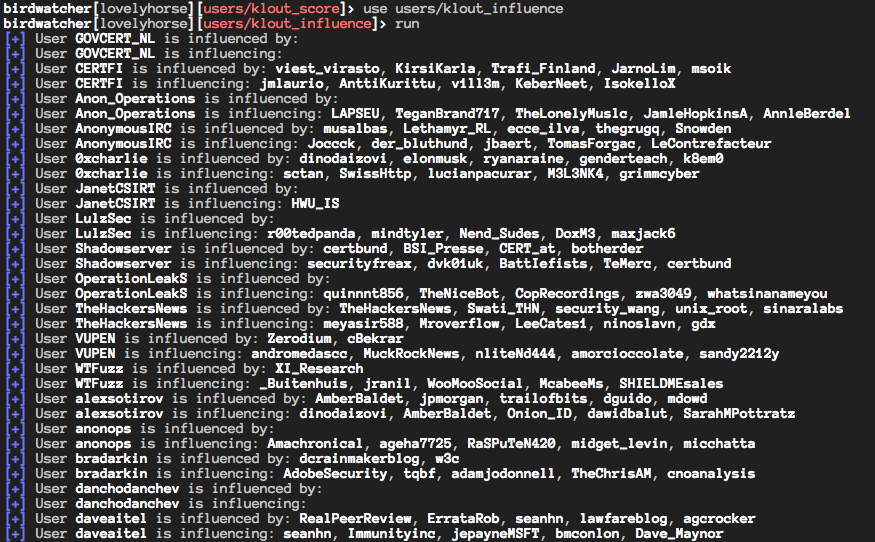 A great way to get a quick sense of what the users are talking about is to use the statuses/word_cloud module. The module can generate a classic weighted word cloud based on Tweets from all users, or a smaller selection, within a window of time. The module has quite a lot of options for customization:

We configure the module with a file destination for the generated image and set INCLUDE_PAGE_TITLES to true in order to mix in the page titles we previously retrived with the urls/crawl module. This gives an even better idea of the topics our users have been talking about over the last seven days:

Generating a word cloud from Tweets.

The result is a pretty word cloud that tells us what has been on our lovely horse’s mind over the last seven days: 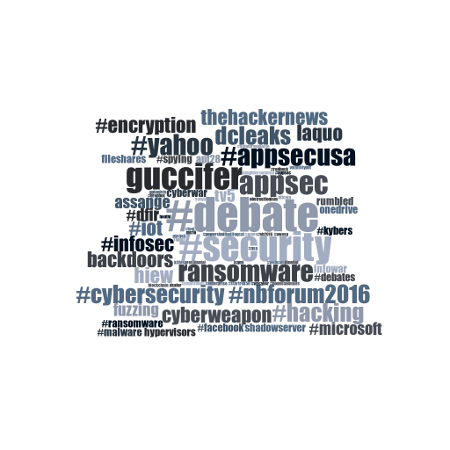 The result of the word cloud module.

The raw influence data we retrieved earlier with users/klout_influence can be visualized and examined with the users/influence_graph module:

Another type of graph we can generate is a social graph that doesn’t use Klout’s influence data but instead finds social connections by analyzing each user’s Tweets for mentions of other users: 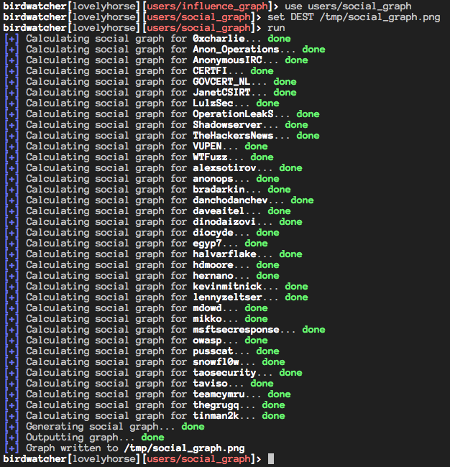 Calculating the social graph between users.

The resulting graph is a bit different from the influence graph and shows a very tightly coupled cluster between some users. The edge weight between users is calculated simply by counting how many times they mention each other in Tweets. The thicker the line, the stronger the connection between two users: 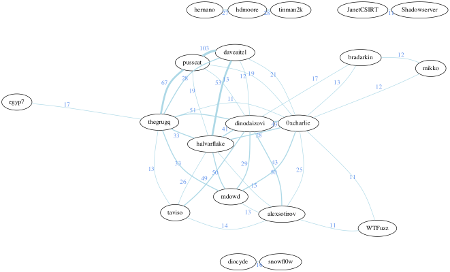 Another question you might ask is at what day and time a user is most engaged with Twitter. This might be useful for finding the time where a user is most likely to engage with you on Twitter. We can use the users/activity_plot module to get an idea of this:

Generating an activity plot for halvarflake.

The resulting plot tells us that halvarflake is generally very engaged with Twitter on Fridays at around 8AM and Tuesdays & Wednesdays at around 7PM:

The last module I want to demonstrate in this blog post is the urls/most_shared module. The module will simply list URLs shared within a specific window of time ordered from most to least shared. If a URL has been shared by several users it is a pretty good indicator that it has interesting information: 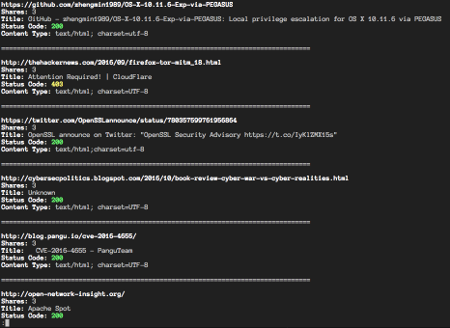 Paging through the shared URLs.

Because we ran the urls/crawl module earlier we also see page title, content type and HTTP code which is very convenient. Because I used Tor as an HTTP proxy we also ran into a CloudFlare CAPTCHA wall.

This concludes my first post on Birdwatcher. I hope you enjoyed it and hope you will include it in your OSINT toolbox. Feel free to file any bugs on GitHub or give me ideas for new modules.